“I personally believe when an artist paints a nude body it is a purification of the body. It is the affirmation of a certain concept devoid of any ambiguity or anything to cover it.” – Hani Zurob

We are pleased to announce that a selected body of Hani Zurob’s artworks have been featured as part of the Dalloul Art Foundation’s video exhibition “The Nude” – a three part series looking at how Arab artists use nudes as a subject matter to depict sexuality, divinity and conflict. Zurob uses his naked body to express complex emotions. After being imprisoned by the Israeli Army, Zurob reacts to the various forms of imprisonment: social, physical, and political, and attempts to investigate his own identity within these various imposed prisons. He uses his body as a form of political resistance and defiance.

In the video exhibition, Hani Zurob can be seen talking about his artworks, specifically, Siege #4 (2004): an acrylic on canvas painting depicting Zurob’s nude body in a more blatant manner. He explains the use of such overt nakedness and nudity is to express ideas of self proclamation in a sense that is unambiguous and clear. He paints to express such sentiments of liberty and reclaiming his own self and body after living under years of political sieges in Gaza, Ramallah and Nablus at the hands of the repressive and oppressive occupation forces.  He paints himself, small, naked, and hunched over, looking up at an authoritative figure, but nonetheless confrontational. Despite his vulnerability, he explains “I personally believe when an artist paints a nude body it is a purification of the body. It is the affirmation of a certain concept devoid of any ambiguity or anything to cover it.” He has painted himself defiant and steadfast.

“The video exhibition series THE NUDE: BETWEEN DIVINITY, SEXUALITY, AND CONFLICT explores and examines the many facets of nudity represented by more than forty artists from different generations and countries from the Arab world, including Lebanon, Syria, Palestine, Egypt, Iraq, Tunisia, and Morocco… Under conflict, the works show the human naked body in allegorical representations. The nude here reflects a state of conflict, primarily in the form of social and political strife. The topics addressed in such works encompass issues of gender inequality, sexual identity, body objectification, and abuse. Conflict mirrors a range of emotions from self-scrutiny, self- intimacy, fear, struggle, resilience, defiance to revelation and fortitude.” 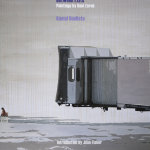